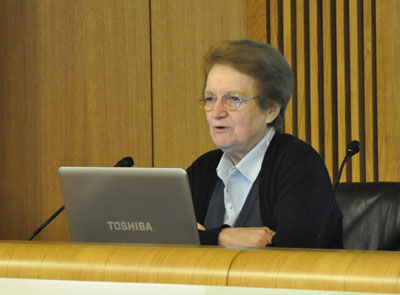 Yesterday evening, after a private viewing of the film Men of God, directed by Xavier Beauvois, the assembly remained in hushed silence, everyone deeply moved and saddened by the events we had just seen. We contemplated the icon of a “holy community” deep in the heart of Algeria-a community whose members were rich in the human virtues and at the same time immersed in the “mysticism” of daily life, made up of simple words and actions, and genuine and profound relationships. The lives of the monks revealed the great faith and intense loved that helped them slowly and arduously overcome their fear of death.

With this powerful and challenging witness of life still echoing in our hearts, this morning we listened to Sr. M. Antonieta Bruscato, Superior General, who presented the initiatives, visits, courses and various activities programmed by the General Government for 2011-2012. Sr. Angela Piccinato, Secretary General, then discussed some of the practical aspects concerning the exchange of information between the General Government and the circumscription governments. Her input was followed by that of Sr. Anna Maria Parenzan, who gave us some information concerning the activities of the Central Commission of the Pauline Family, which is organizing the Centenary of our Family (1914-2014). For the FSPs this event will introduce us into the celebration of the centenary of our own Institute’s foundation (1915). As soon as possible the Commission will let everyone know what initiatives have been programmed, saying that the itinerary leaves abundant space for each circumscription to make its own creative contribution to it.

In the afternoon, we returned to our small work groups to re-examine the syntheses we had previously prepared and transform them in concrete projects, keeping in mind the overall programming of the Congregation. We redefined initiatives, specifying timeframes and individuals to serve as points of reference, so as to ensure that these projects will be implemented.

Things are moving ahead at a lively pace, with everyone contributing to this communal work with great commitment and in a sisterly, co-responsible spirit.